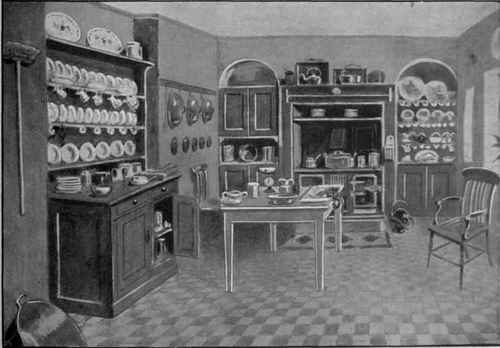 The kitchen was not a place where design details were considered important to a home owner, but to the housewife, the cook, and the chef de cuisine of a large hotel, its layout and equipment were of the utmost importance. In the 1907 edition of Mrs. Beeton’s Household Management, noted that the requisites of a good kitchen were:
1. Convenience of distribution in its parts, with largeness of dimension
2. Excellence of light, height, and ventilation
3. Easy of access, without passing through the house
4. Walls and location so arranged that the odours of cookery cannot spread about the house (the Victorians and Edwardians had a phobia of kitchen smells!)
5. Plenty of fuel and water, which, with the scullery, pantry and storeroom, should be so near the kitchen as to offer the smallest possible trouble in reaching them.

The issue of sanitation was also one of importance, and it was advised that walls be made of white glazed tiles and floor coverings of oil-cloth and linoleum. However, this varied depending on the architecture of area–for example, flags of smooth stone were cemented together to form a smooth floor in the north of England, the kitchen floor usually consisted of unglazed red tiles in the Midlands, and on the east coast, floors were frequently laid with red or yellow bricks. Kitchen fixtures were simple and utilitarian, and a well-constructed sink of either wood lined with zinc, stoneware, or lined with cemented tiles were recommended. A large work table was the most important article of furniture, and the drawers at each end contained the cook’s tools, such as knives and spoons, and small utensils and implements in constant use. The last, but by far the most important of the kitchen requisites was the kitchen range, or kitchener, which was used for cooking, heating water, and so on. The kitchen range was a range, either open or close, that was fixed in its place with brickwork, the kitchener was a range entirely independent of its surroundings and stood on four legs, and the gas range or stove was similar to the kitchener, but was, of course, run with gas. Oil stoves and cooking by electricity were also popular options, though the latter was incredibly expensive to run.

A kitchen in tip-top form always contained a full array of utensils. There were the stewpans and saucepans of tin, copper, brass, enameled iron, and wrought steel; the boiler for boiling large joints, hams, and puddings; the digester, a small stock pot; the stock pot itself; the braising pan; the double or milk saucepan (a small bain-marie); steamers; fish-kettles; fish fryers; the frying pan; the bain-marie; the dripping pan; the gridion; and the dutch oven. Other must-have utentils were weights and scales, a mincing machine, steak tongs, knives, a colander, a pestle and mortar, a chopping board and bowl, preserving pans, sieves, coffee and pepper mills, baking dishes, tartlet pans, vegetable cutters, an egg poacher, freezing machines, water filters, refrigerators, etc.

2 replies on “Edwardian Interiors: The Kitchen”