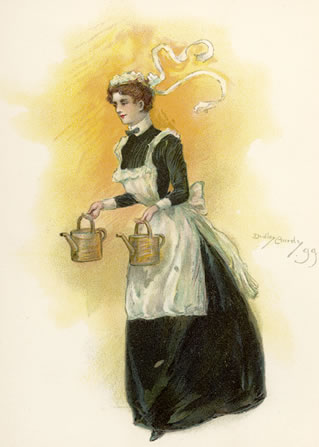 As “First Family,” the President, his wife and children, and any other dependents, had their needs and cares were catered to by a bevy of secretaries, secret service agents, and most important of all, domestic servants!

According to Helen Taft, “the management of the White House is a larger task than many women are ever called upon to perform.” During the presidency of Theodore Roosevelt, the White House staff consisted of more than forty men and women, including the clerical force in the executive office, Mrs. Roosevelt’s social secretary and three maids, the steward, two butlers, the President’s family cook, the house cook and assistant, one pantry man, four cleaners, the gardener and his assistants, laundresses, firemen, watchmen, janitors, plumbers and electricians. All of these positions were paid for by the Government, with the exception of the family cook and the white maids–as most of the domestic staff (for most D.C. and Southern households) at this time were black. White House standbys included the Paymaster, the Doorkeepers, the Assistant Secretary, and the Telegrapher and “Chief Intelligence Officer.”

The most important position was the White House Steward. A virtual autocrat of the official table and cuisine at the President’s house, almost every question governing the State dinners was within their control. Receiving an annual salary of $1800, the steward supervised and accounted for every detail of the household; no piece of broken glass or china could be destroyed except upon the order of the Superintendent of Public Buildings and Grounds. Even the First Lady had little say in the culinary department of household affairs–though Mrs Taft promptly hired a housekeeper in lieu of a steward from the beginning of her husband’s presidency most likely in response to this lack of control.

For protection, the First Family was guarded by the Secret Service, and in addition, the White House itself had its guards in the form of policemen from the regular Washington Police Force. The actual number of Secret Service guards in attendance upon the President was never made public, but it was certain that at all receptions, a number of such guards were on duty within the house, while several more were stationed outside. The President never stepped outside the White House, never traveled even the shortest distance, without being followed by one or more Secret Service officers.

During dinners and other receptions hosted by the President, secret service men and police officers dotted the White House. When entering the White House, every person was closely scrutinized, particularly since Congressmen were in the habit of giving cards of admission to anyone who asked for the favor. The most important rule was to keep one’s hands in plain sight. It was the most rigid rule of the White House, and if a person happened to rest a hand in their pocket, or under their coat-tails, a low whisper immediately told them to take it out. Also in attendance upon the President, at all receptions and on all State occasions, were military and naval aids. Their duties were purely social, yet prestigious.

Despite the tumult of incoming and outgoing Presidents of different political persuasions, the cogs that kept the White House running always ran smoothly. Many White House staffers ended up working in there for many, many years, and cherished their time spent in the President’s House.

For more information:
Workers in the White House

2 replies on “The Care and Feeding of the First Family”