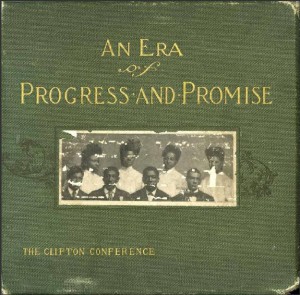 I want to thank Rebecca Hyman, Reference and Outreach Librarian, and Lisa A. Gregory, Digital Projects Liaison, for their much appreciated assistance and patience with my numerous attempts to read this e-book! This book, An Era of Progress and Promise, was compiled by W.N. Hartshorn of Clifton, Massachusetts to celebrate the “religious, moral, and educational development of the American Negro since his emancipation”.

From 1901 to 1908, Hartshorn hosted the Clifton Conference to discuss the educational and religious opportunities available to African Americans. He published his findings in 1910, the bulk of which An Era of Progress and Promise is comprised. It provided a comprehensive portrait of early African-American schools, colleges, and churches as well as biographies of African-American educators, ministers, and influential businessmen. Excerpts for An Era of Progress and Promise were originally made available online in 2004 but were limited to institutions or individuals with direct North Carolina connections. It has now been made available in its entirety by the State Library of North Carolina, and is one of the best resources for African-American life and culture during the Gilded Age.

Read An Era of Progress and Promise now.