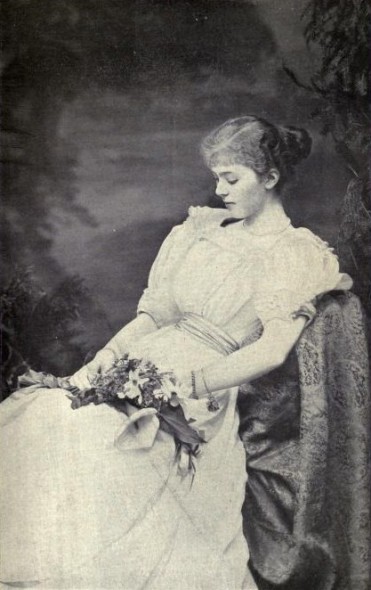 Lady Angela Forbes was born Lady Angela Selina Bianca St Clair-Erskine (1876–1950) to the rakish 4th Earl of Rosslyn and his wife, the former Mrs. Charles Maynard. From her mother’s first marriage, she was half-sister of Daisy, Countess of Warwick. At adulthood, she was nearly 6 feet tall and devoted her life to hunting and shooting. She married James Forbes in 1896, and they divorced in 1907. By 1912, she was known as the longtime mistress of Lord Elcho, which granted her entree into The Souls. This excerpt is from her memoirs, Memories and Base Details (1921)

I SUPPOSE my coming out really dates from a cotillon given by Lady Kilmorey at the “Savoy,” although in those days coming out meant curtseying to the Queen, and before that event one was definitely and irrevocably in the schoolroom. My debut might have been hastened had I agreed to finishing my education in Germany; but having escaped from German governesses I had no desire to see their country or eat their food. At the last moment, though the cab to take me to the station was actually at the door, I jibbed, finally and firmly; so my boxes were unloaded and as an alternative I was kept for another six months in the schoolroom in Scotland.

But to return to the cotillon. Blanchie (her half-sister, Lady Algernon Gordon- Lennox née Blanche Maynard)  took me. It was quite small and a ” married woman’s ” ball, which meant that very few girls were asked. Gerald Paget led it I can’t remember who with, but I can distinctly recollect one figure, a Noah’s Ark with pairs of all the animals that Noah had ever seen and more besides! The man had to find the woman with the corresponding animal; an enormous number of animals came my way and I was introduced to so many people that evening that my brain positively reeled.

The Drawing-room was a week later. I had a lovely white frock made by Mrs. Mason. She was “it” in the dressmaker line; all her models came direct from Jean Worth, and everyone who had any pretension to dressing well in those days bought their frocks from her. She was a most perfect old lady and might have been a duchess instead of a dressmaker. She lived in Old Burlington Street and always wore a black cashmere or taffeta frock herself, with a folded white fichu. She it was who revived the ” picture gown,” and she took her models for these from Romney and Gainsborough. Her prices were supposed to be exorbitant, but compared to those of to-day they were almost insignificant!

I was terrified of tumbling over my train, and I didn’t like the feathers in my hair at all. We had the entree, so there was none of that waiting about incidental to most Drawing-rooms. I had been carefully instructed to kiss the Queen’s hand, and that she would kiss my cheek, but when it came to the point I quite forgot all my instructions and I kissed her on both cheeks. I realized too late what I had done, and felt distinctly foolish, but the Queen didn’t seem to mind a bit. The Prince of Wales, who saw my dilemma, of course chaffed me about it, which added to my discomfiture; but I went on bobbing to the other Royalties until I suddenly found my train flung over my arm by a gentleman-in-waiting, and I was out of the room. It was all over so quickly that it seemed a fearful waste of time to have dressed up for those few minutes. After that I was properly launched into the vortex of the London season, and the days were filled up with the usual entertainments and other events which were crowded in between Easter and Goodwood.

0 replies on “Lady Angela Forbes on her Debut in Society”