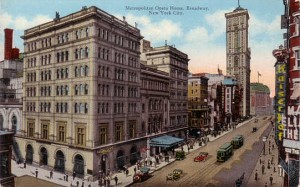 New York City at the turn of the century was a time of transformation. From a sleepy collection of boroughs along the Hudson to a bustling, frenetic city of millions, New York was a city on the verge of tremendous changes. Not surprisingly, many of them were created to meet the needs of the thronged streets and avenues.

By the end of the 19th century, society both fashionable and wealthy, as well as the entertainment world, moved up the island. Broadway was lined with electric streetlights and packed around the clock with theatergoers, club patrons, chorus girls and tourists. But the glamorous limelight was at this time focused on 42nd Street and points south, in the district then known as the Upper Rialto. This scene marked the birth of Times Square. 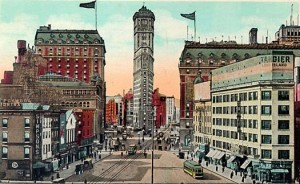 Originally called Longacre Square after a similar London district, this intersection of 42nd Street, Bloomingdale Road and Seventh Avenue was made of the nexus of important roads to the north of the island. With the shift north, New York Times publisher Adolph S. Ochs moved his operations to the newly-built Times Tower. Marooned on a tiny triangle of land at the intersection of 7th Avenue, Broadway and 42nd Street, it was at the time Manhattan’s second-tallest building. Having persuaded the mayor to build a subway station there, the area was also renamed “Times Square” on April 8, 1904. Three weeks later, the first electrified advertisement appeared on the side of a bank at the corner of 46th Street and Broadway.

To inaugurate the move, Ochs hosted a massive celebration in the square for New Year’s Eve. Over 200,000 people attended the all-day street festival, which culminated in a fireworks display set off from the base of the tower, and at midnight the joyful sound of cheering, rattles and noisemakers from the attendees could be heard, it was said, from as far away as Croton-on-Hudson, thirty miles north along the Hudson River. While there was no ball, the popularity of the party paved the way for the first dropping of a time ball in Times Square to ring in the New Year on December 31, 1907. 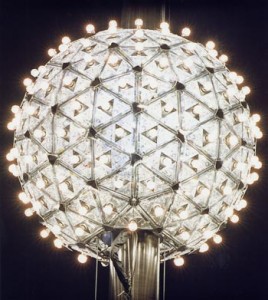 The first New Year’s Eve Ball was built by a young immigrant metalworker named Jacob Starr, and for most of the twentieth century the company he founded, sign maker Artkraft Strauss, was responsible for lowering the ball. Constructed with iron and wood materials with 100 25-watt bulbs weighing 700 pounds (318 kg) and measuring 5 feet (1.5 m) in diameter, it was affixed to the flagpole at 1 Times Square to drop 1 second after midnight. To ring in 1908, waiters in lobster palaces and fine restaurants in the hotels surrounding Times Square were supplied with battery-operated top hats emblazoned with the numbers “1908” fashioned of tiny light bulbs. At the stroke of midnight, they all “flipped their lids” and the year on their foreheads lit up – conjunction with the numbers “1908” on the parapet of the Times Tower lighting up to signal the arrival of the new year. 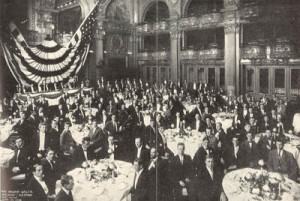 One can only imagine how chaotic the celebration must have been, based on the report given by the Times:

“…100,000 people supped at midnight. The storm center was the new Hotel Plaza, at 5th avenue and the Plaza. Between 11 and midnight, more than 6000 people stormed the doors. Crowds filled the lobbies and almost fought their way into the three large dining rooms and tea room. People who had reserved tables couldn’t get in for all the rush…Mrs Stuyvesant Fish got no further than the entry until a gentleman used his girth to force his way through the crowd for her to follow…Visiting from place to place was very much the vogue. Many who began at the Plaza went to Cafe Martin later. Each hotel and restaurant was filled with celebrities culled from the stage and opera–Lina Cavalieri, Caruso, John Barrymore–society and the very rich…The Waldorf-Astoria was a social scene. Venetian fete on the eighth floor of the Hotel Astor…The proprietor of Cafe Martin gave permission for ladies to smoke that night, but none did…From to midnight, Broadway from Canal to the Battery, was crowded with merrymakers. Just before the ringing of the chimes in the tower of Trinity Church the crowd surged onto Broadway, and from Vesey Street south, passage was impossible for cars and carriages…”

A testament to New York’s rapid change, Times Square went from simple area known for its horses and carriages to the dazzling, billboard advertisement square you see today in a period of less than ten years. Despite its complete transformation, there remains one constant link with the past: the New Year’s Eve celebration.