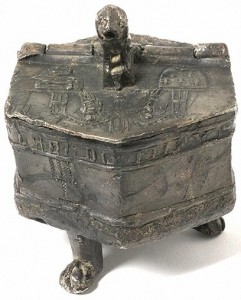 The evolution of formal dining begins in the medieval era, where dining became a sign of social status. At that time, the table setting included the Salt Cellar, which was the first thing put on the table. The salt was far more than a condiment–to sit above the salt was to sit in the place of honor, and until the salt was put upon the table, no one could know which seat would be allotted to him or her. Then came the silver dishes for holding vegetable or fish, sometimes meat, and small loaves of bread. Spoons and knives, however, were not furnished by the host, but were brought by guests whose servants, so equipped, cut the meat and carved the food for each person. The guests also had no plates or forks, and few knives, but ate with their hands and threw the refuse on the floors. The cleanliness of the cloth, or Nappe, was of paramount importance and a matter of great pride.

As the nobility began to express its wealth in its silver trenchers, wassail bowls, ewers, lavers, basins and other implements, and other tools of the table, eating became less egalitarian and the classes stratified based on their table settings.

Spoons were now brought by guests, and these elaborately designed silver utensils were often gifts of one of the sponsors at baptism–a practice that most likely spawned the phrase “born with a silver spoon.” Forks came later, and their introduction produced much criticism, with the objectors opining that “fingers were made before forks.” The fork came from Italy, and the early 17th century correspondence of Thomas Coryat cites the new discovery as almost as important as the discover of America, and causing far more discussion. By the reign of Charles II, forks were in common use. 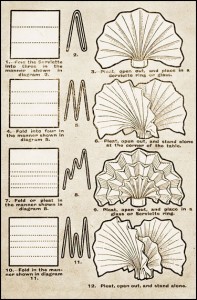 The fork did much for the simplification and advancement of culinary art by encouraging the taste for solid viands and natural flavors. The use of the fork also made possible the delicate slice instead of the gobbets of meat of the century before; also, the fork promoted cleanliness at the table. It subsequently made possible choicer table linen, finer clothes and handsome napkins, and there soon developed definite rules for folding and laying the napkin (there was published diagrams showing twenty-five ways to fold a napkin!). Knives, forks, spoons, platters, ewers and basins created a custom for a more dignified setting of table, and with these new table appliances, manners improved and culinary art advanced to higher standards–the better to fit the richer and more elaborate table setting and silver service. By the 18th century, more attractive and stately service were developed, and silversmiths were set to work to achieve higher and higher standards of art in metalwork.

Finer woodwork and other metal works developed concurrently with silverware, and as the wealthy, the noble, and the royal began to fill their houses with costly, exquisite goods, their table settings became more elaborate and dining became a pageant in its own right. Vast, elaborate meals became a way to assert power, wealth and status, and this practice moved the aristocracy and royalty back into public view. But this time, with the arrival of the Dutch practice of alternating seating for the sexes, women sat at the table on equal footing with men. 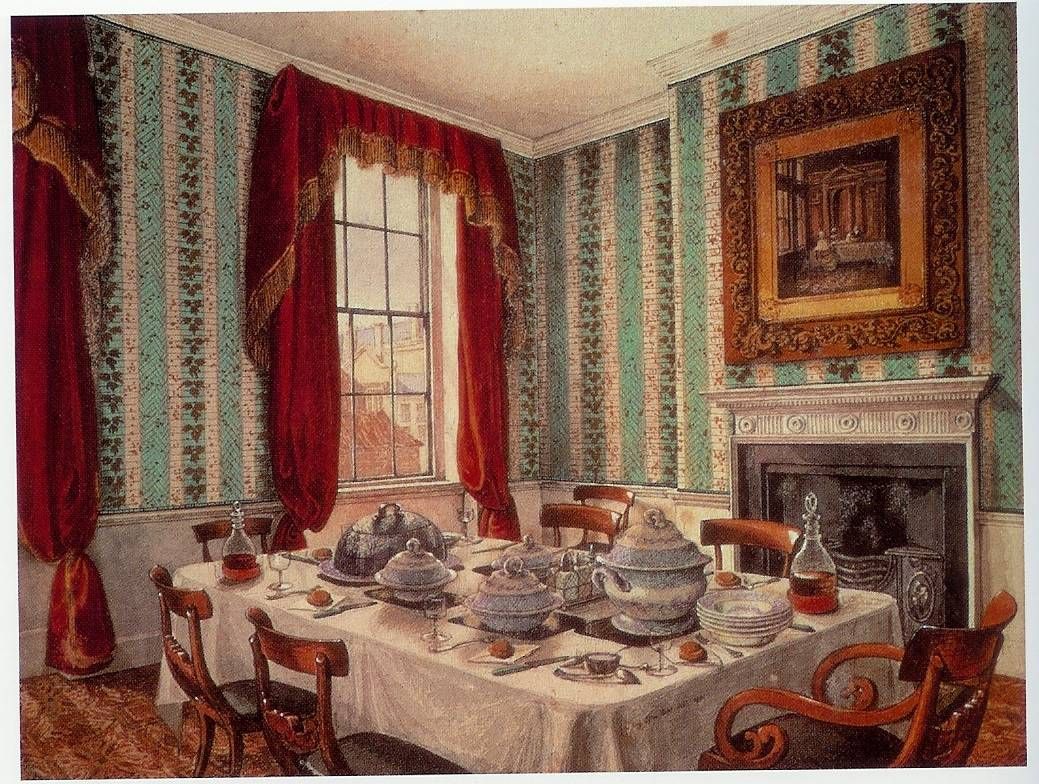 Service à la française, whereby separate courses were created rather than two or three courses, where everything alike was lumped together, took hold of the gustatory habits of the wealthy at the turn of the 19th century. This imposed new rules on the order in which food was to be served: the theories of Carême and Brillat-Savarin felt that the foods’ relationships to one another were an important element of the dining experience, and both believed food should be served in this order: soup, fish, meat, game, sweets and fruits, and the side dishes were to complement these main items. This method was better than the previous methods of serving diners, but it was difficult to keep the dishes hot by the time they reached the table from the far-away kitchen. Because of this, service à la française was rendered impractical, making room for service à la russe, or service in the Russian style, which was brought to France in 1811 by the Russian ambassador.

However, this style of service did not catch on in England or America until the 1860s and 1870s, where the English style of service (where all the food belonging to one course is placed in suitable dishes before the host/ess and is served from the table) was more prevalent. With the Russian style of service, there was greater emphasis on the presentation of both meals and place settings. Now, when guests arrived to be seated for dinner, there were place cards designating where one would sit, a menu provided from which one would choose the dishes to eat during each course, and rather than sitting to a table laden down with chafing dishes and platters of food, there was a simple “cover,” which consisted of the plates, glasses, silver and napkin to be used by each person. With this new emphasis on table setting, as with the influx of the newly rich knocking at the doors of the upper classes giving rise to etiquette books, service à la russe created a set of rigid, correct rules for cutlery, china and table adornments.

The table now cleared of food, table setting blended four elements of design: central decorations, flowers, color, and mirrors. Central decoration usually consisted of epergnes or plateaus, the latter of which was a raised mirror, often with silver or gilt decorations on the raised sides, while the former was a tall stand with hanging arms that held either baskets of sweets, or platforms that held glasses containing sweets. The custom of placing flowers on the dining table began in the early 19th century, but by the turn of the 20th century, the use of a heavy candelabra and elevated dishes alternating with low dishes took hold. Large masses of flowers covered the table, nearly crowding out the place settings, and the individual places were often delineated by strands of ivy or other flowers strung between each cover. Color was important to the early- and mid-Victorians, and colored table runners, color glasses such as green hock glasses or ruby-colored wine glasses, added a deep splash of color against the already crowded table.

Added to this were mirrors, which generally reflected peaceful scenes if a mirrored plateau with figures was not being used. The Edwardian era saw a streamlined table setting, where the table was cleared of the masses of flowers and other accouterments in favor of a simple arrangement of candelabra, bowls of fruit and flower arrangements set one after the other along the length of the table. Now, instead of candles, small lamps, shaded by delicate lampshades, cast an intimate glow across the dining table and its diners.

Beneath the table decorations lay the more important articles of gastronomy: the tablecloth, the dishes, and the silverware. Maids setting the table for dinner were instructed to first lay the silence cloth (of double-faced cotton flannel, knitted table padding, or an asbestos pad) upon the table, then to lay the covers, allowing 24-30 inches from plate to plate.

If the table was bare, the covers were marked by plate doilies. A service plate was then laid for each person, one inch from the edge of the table, and this plate remained upon the table until it was necessary to replace it with a hot plate. The silver placed in the order which it was to be used, beginning at the outside and using toward the plate. Silver for the dessert course was never put on with the silver required for other courses, except for the dinner that was served without a maid. Neither was the table set with more than three forks. If more were required, they were placed with their respective courses. The salad or dessert silver was brought either in on the plate, or placed beside a napkin or tray at the right, from the right, after the plate is placed. The knife or knives were placed at the right of the plate, half an inch from the edge of the table, with the cutting edge toward the plate.

Spoons, with bowls facing up, were placed at the right of the knife, and forks, with the tines turned upward, at the left of the plate. The spoon for fruit or the small fork for oysters or hors d’œuvre was placed at the extreme right or on the plate containing the course and the napkin was at the left of the forks, and the hem and selvage was required to parallel with the forks and the edge of the table. The water glass was placed at the point of the knife, the bread-and-butter plate above the service plate, and the butter spreader across the upper, right-hand side of the bread-and-butter plate. Salt and pepper sets were placed between each two covers. 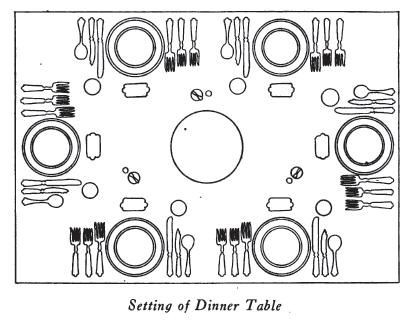 Besides this new emphasis on table setting, the most important and enduring development derived from service à la russe was the matching of dishes to wines. Before, diners would eat and drink wines to their own tastes, but the Russian service, with its sparser table, made it logical to serve a particular wine with each course. Due to this new protocol of complimentary food and wine, the types of and numbers of wine glasses the diner had to negotiate grew.

Now the opening oyster course was to be eaten accompanied by Chablis, the soup and also the hot hors d’œuvre with sherry, fish with hock, removes and entrees with champagne, the meat with burgundy, game with claret, and dessert with port, Tokay, or other fine wines. Cocktails later joined this group by the turn of the century, though the practice of having a cocktail before dinner did not emerge until the 1910s. Needless to say, though the formal table setting has simplified much since the 19th century, the array of flatware, dishes and glasses remain formidable and continue to impose a barrier between the wealthy and the middle- and lower-classes. From this evolution of formal dining, we can see that though most do not dine with such elaborate courses or settings, the interest in food and eating has not abated in a thousand years.

4 replies on “Setting the Table”