A few weeks back I discovered this amusing yet quite frightening article scanned and blogged by Lauren of Wearing History. In this 1910 article from The Delineator, which was one of America’s most popular home and fashion magazines before Vogue, Harper’s Bazaar, et al, American humorist Gelett Burgess penned a piece on plastic surgery. Though this is written in first person, and I assume it was written with his tongue firmly in cheek, based on the fashionable practice of enameling (enamel was injected into wrinkles) and injecting wax into the face (Gladys Deacon!), and the presence of plastic surgery in Edwardian beauty books and WWI articles, this tale cannot be too far-fetched! Read it and let me know what you think. 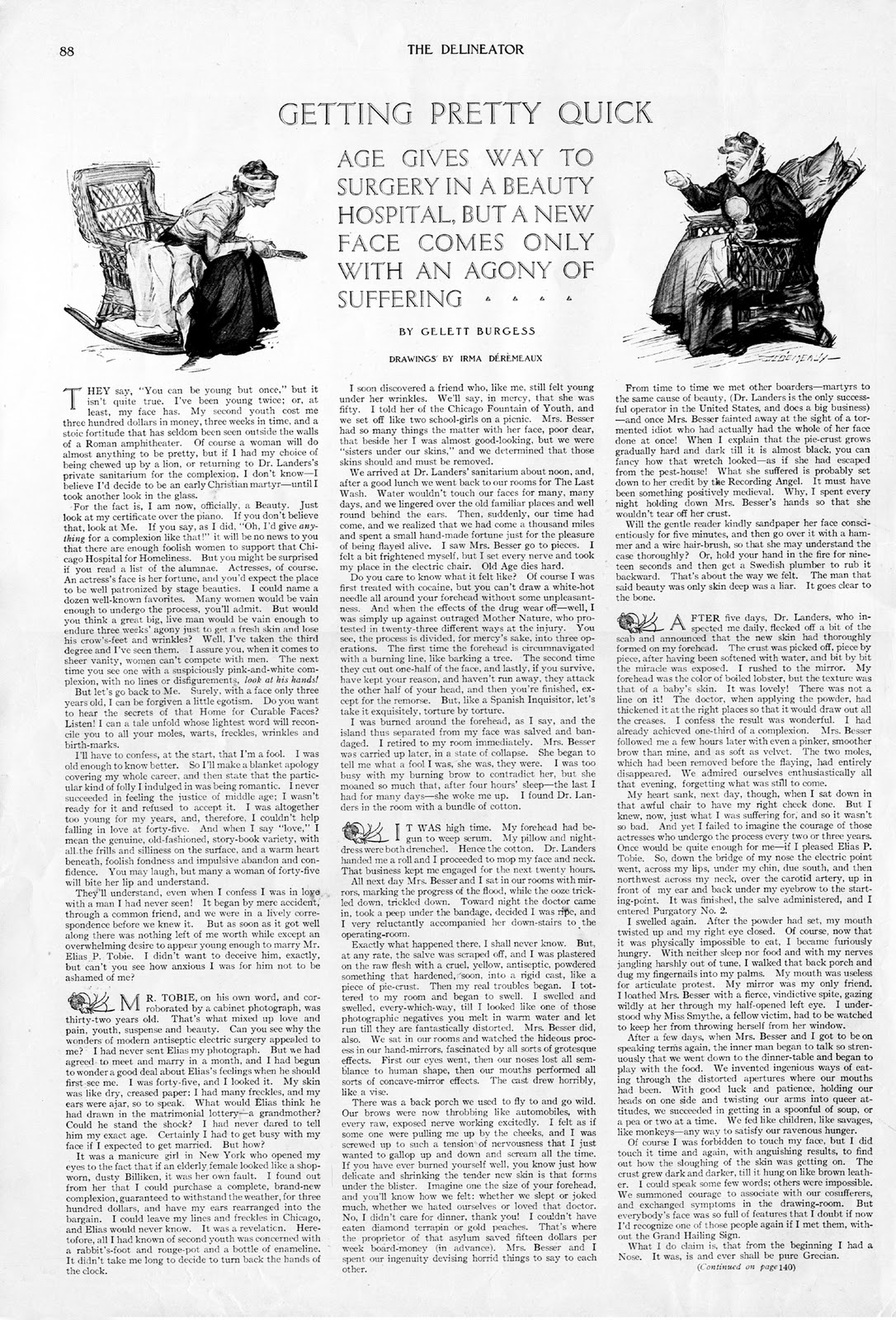 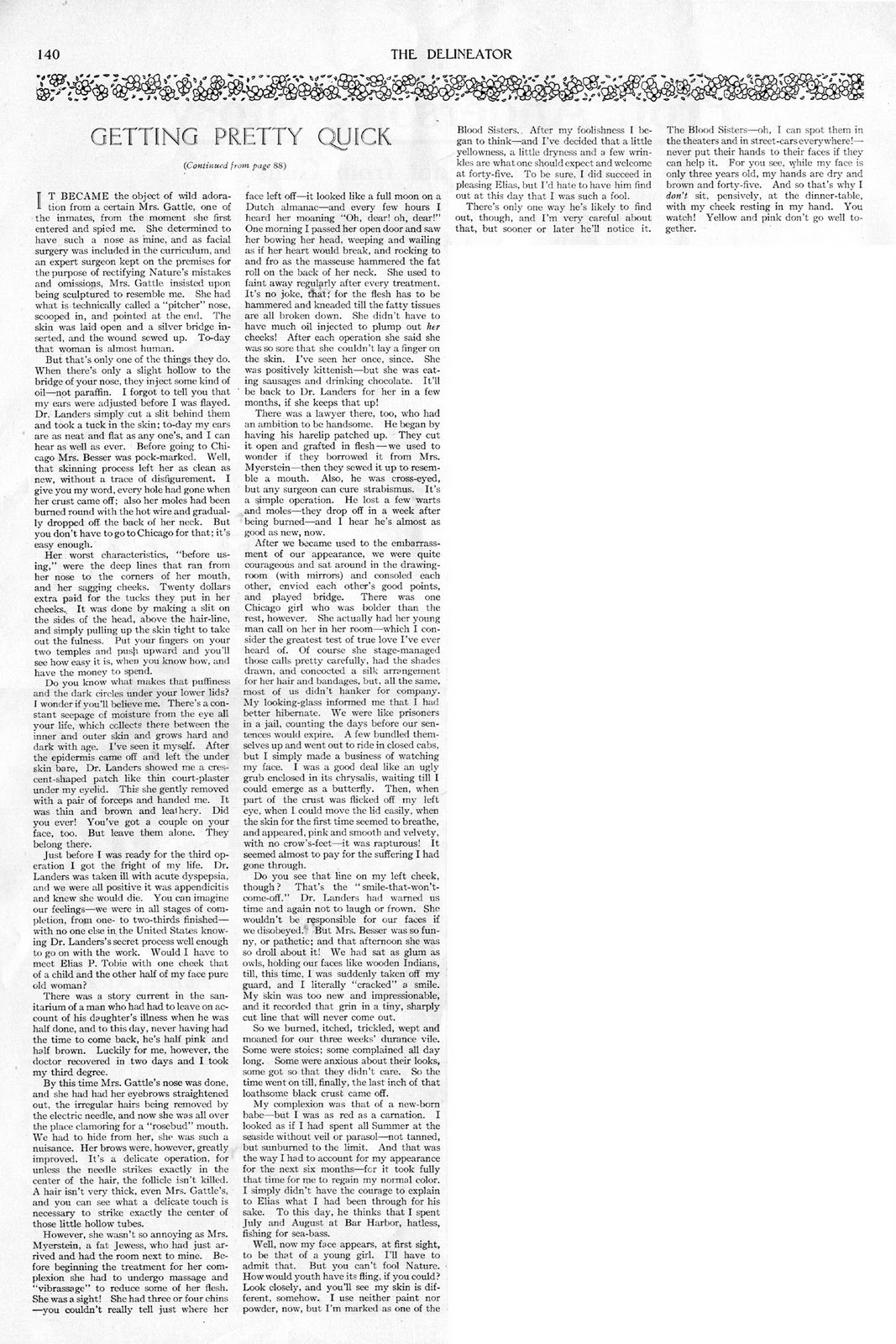 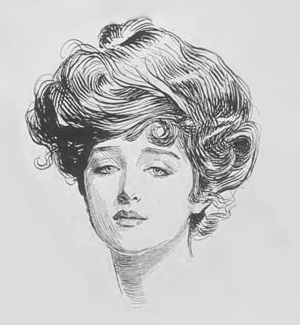 Contrary to the calm and perfect photographs and portraits of stately Edwardian beauties, as well as the trim, pert figure of the Gibson or Gaiety Girl, loveliness took a lot of work. In my former post, The Chemistry of Beauty, we discussed the products Edwardian women used to beautify themselves, and it was surprising to learn that many of the products used by either ourselves, our mothers, or our grandmothers had roots in the late 19th and early 20th centuries. But what is equally surprising are the beauty rituals and advice dished out to women in manuals published for the consumption of beauticians and the public. From manicures, to bunions and corns on the feet, to getting rid of gray hairs, and fighting wrinkles, a variety of modern-sounding treatments, exercises, and devices were created to help the distressed woman reach her full potential. Ironically, as also found in modern magazines and books, advice was given with the treacly sweet notion that a woman’s true beauty came from within. 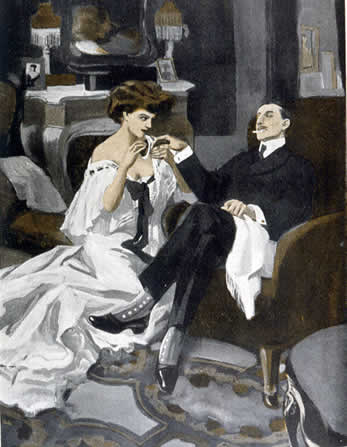 Manicuring had formerly been considered a part of the doctor’s profession, but by the turn of the century, it became a separate practice in its own right, and a recommended occupation for working women. Because of the sudden demand for manicurists, it was a very lucrative profession, and its short hours, the ability to have a flexible schedule, and its all-around glamorous aura, young women acquired manicurist licenses in droves. Many times a manicurist was attached to a barber shop, and oddly enough, the first consumers for this new service were men! The work was simple, consisting of the trimming and shaping of the nails, trimming the cuticle, and when necessary, performing slight operations in shaping the nail or doing away with hang nails, and also removing stains and polishing. A complete set of tools for the expert manicurist included a file, scissors, cuticle knife, buffer, polisher, orange sticks, finger bowl, nail brush, and emery boards. Other items necessary for a manicurist were Castile Soap, Borax, Nail Bleach, Nail Powder or Polish, Nail Cream, Cold Cream, Styptic Pencil, and Tincture of Benzoin, which was used as an antiseptic.

Nail polish existed in various forms since before A.D., and 19th century cookbooks contained directions for making nail paint, the stigma against any form of cosmetic was too strong, and most women merely polished their nails with tinted powders and creams into their nails, then buffing them shiny. Nail polish could also be mixed by manicurists. One mixture was composed of Oxide of Tin, Carmine, Oil of Lavender, and Oil of Bergamot. Tips were, however, whitened with items such as Cutex Nail White, and polished with Cutex Nail Cake. Care for the nails included massaging cocoa butter, Vaseline, or olive oil on them for shine and health. One of the famous polishing products sold was Graf’s Hyglo nail polish paste. Women used this clear, glossy varnish to paint their nails with camel-hair brushes. Colored nail polish didn’t arrive on the scene until 1920, inspired by automobile paint, as until then, cars were typically black or maroon in color. But it wasn’t until the 1940s that the entire nail was painted–it was fashionable in the 1920s and 1930s to leave bare the tips and half-moon on the nail-bed.

END_OF_DOCUMENT_TOKEN_TO_BE_REPLACED 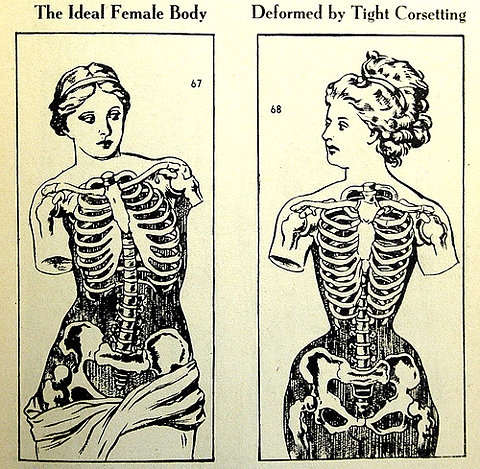