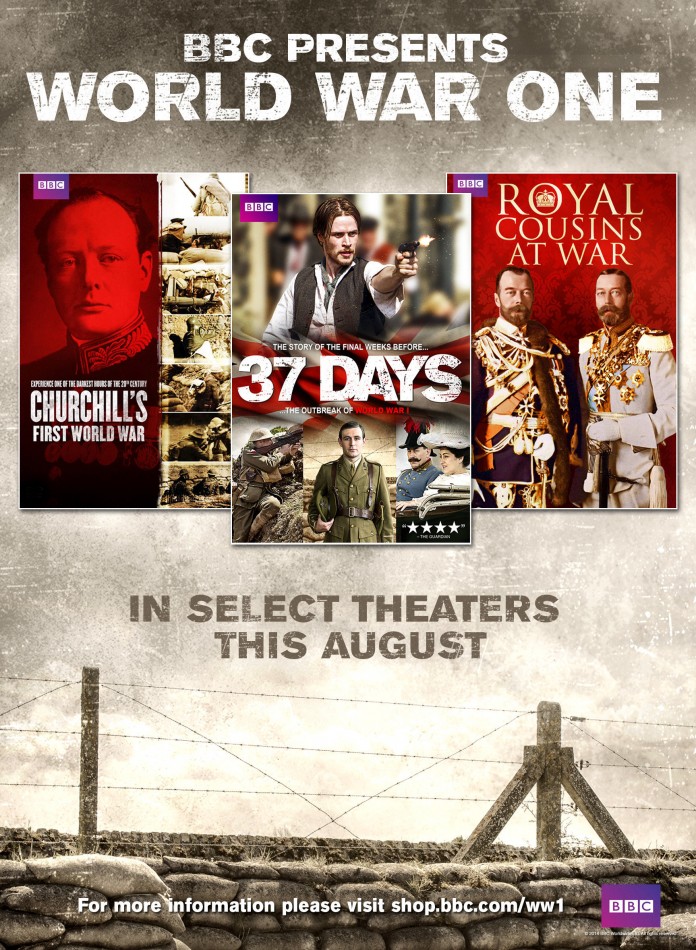 Premiering in the U.S., Three Films Coincide with the War’s Centennial and Shed New Light on the Conflict

NEW YORK, July 8, 2014 /PRNewswire/ — In commemoration of the 100th Anniversary of the start of World War I, BBC Worldwide North America will, in a unique departure, premiere three historic films in theaters across the U.S. this August: 37 Days: The Road to World War I, Royal Cousins at War: The Final Blow to the Royal Houses of Europe and Churchill’s First World War. The screenings will be free to the public and will be held in prestigious independent cinema houses including the American Film Institute Silver Theatre (Washington D.C.), the Paley Center for Media (New York City), the American Cinematheque (Los Angeles), and many more. This special screening series solidifies BBC Worldwide’s commitment to bring the best of British programming in all formats to U.S. audiences while sharing pivotal moments of the war from a uniquely British point of view.

“While it has been customary to premiere our programming on television or digital platforms, we believe the 100th anniversary of World War I deserves special treatment and that is why we decided to present these three incredible films in theaters for free,” said Soumya Sriraman, EVP Home Entertainment & Licensing, BBC Worldwide North America. “Each film provides an interesting perspective on the many facets of the war, from its roots to its legacy. Creating a theatrical event around these films provides the perfect forum for community viewing,” she said.

Often referred to as “The Great War,” World War I began in July 1914 with the assassination of Austrian Archduke Franz Ferdinand.  This triggered an interconnecting network of alliances to spark mobilization, bringing in the empires of Europe. England, France and Russia lined up against Germany, the Austro-Hungarian Empire and the Ottoman Empire. The war ended four years later with the armistice of 1918.

37 Days: The Road to World War I
This three-part political thriller follows the catastrophic chain of events which began with the assassination of the Archduke Franz Ferdinand on June 28, 1914, and led to the declaration of war between Britain and Germany on August 4th. 37 Days explores with breathless tension the tragedy of how Europe’s old conventions of secret diplomacy fell apart – or were destroyed. This fascinating and provocative drama, featuring stunning performances from actors such as Ian McDiarmid (Star Wars) and Tim Piggott-Smith (MI-5, Quantum of Solace), unlocks the mystery of the war’s origins. By overturning common assumptions about its inevitability, the film demonstrates that World War I did not happen by chance, and nor was it a foregone conclusion – it took considerable effort and staggering bad luck.

Royal Cousins at War: The Final Blow to the Royal Houses of Europe
At the outbreak of World War I, three cousins reigned over Europe’s greatest powers – Tsar Nicholas II of Russia, Kaiser Wilhelm II of Germany and King George V of England. This two-part series looks at the role played by the three monarchs, and their relationships with each other, in the outbreak of war. Mismanaging their countries and mishandling foreign policy, they failed to adapt to the forces of nationalism and democracy, and so brought tumbling down their own ideal of a Europe governed by the descendants of Queen Victoria. While it was war that delivered the final blow, this fascinating series shows how the problems had set in much earlier.

Churchill’s First World War
This landmark docu-drama re-examines the darkest hours of Winston Churchill, combining a fascinating re-evaluation of his epic and traumatic experiences in the World War I and his contributions as Britain’s greatest warlord. Disgraced by disasters in the Gallipoli wars, and with his political reputation in tatters, Churchill was all but finished. He was also tormented, for he knew that he was one of the very few political leaders opposed to the strategy of endless attrition in Flanders. His promotion of tank and air power stemmed from his determination to find another strategy. Illustrated with the extraordinary correspondence Churchill sent from the trenches to his wife Clementine, revealing intimate insights into life on the front, and with testimony from leading historians and military experts, this is the story of his fall – and his road to redemption.

The U.S. premiere event screenings kick off August 2 at the following locations. Anyone interested in any of the films is encouraged to check local listings for dates and times. For more information, go to http://shop.bbc.com/ww1.

BBC Worldwide is the main commercial arm and a wholly-owned subsidiary of the British Broadcasting Corporation (BBC) operating in the U.S. and Canada.  The company exists to maximize the value of the BBC’s assets for the benefit of the UK license payer and invests in public service programming in return for rights. The company operates channels, a production arm, consumer products and a digital business, in addition to handling sales & co-productions.  Under these businesses fall two key brands in the U.S. – digital cable channel BBC AMERICA and BBC Worldwide Productions, the production arm responsible for the smash hit Dancing with the Stars.