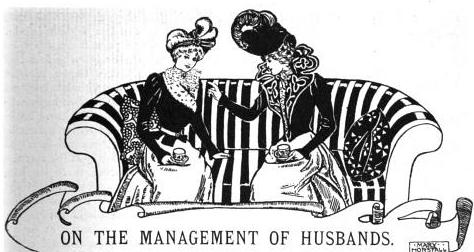 “Management is a stupid word,” said Diana Templewick, when I asked her opinion on this all-important subject.

Not being married myself, I felt hardly qualified to tackle so serious a problem single-handed; and I have never yet discovered the question which Diana has not been able to answer.

I had found her at home in her cosy house in Grosvenor Square, having her wealth of black hair combed out by her maid. Seeing I wanted a chat, she dismissed her, and continued:

“Management is a downright clumsy word, but there is not a better one in the English language; the French word ménagement has a nicer sound. Nobody likes the idea of being managed, though it is an acknowledged fact that a certain amount of ménagement on the part of a wife is necessary to make the matrimonial car run smoothly.”

Diana looked up at the ceiling with her wonderful dark eyes, then at the point of her dainty slippers, as though for inspiration.

“Of course, the same advice does not hold good for every husband,” she said. “‘As the man is, so must you humour him.’ But there are a few golden rules which fit the majority of cases.

“For instance, Mr. Punch’s oft-quoted advice to ‘feed the brute’ is not far wrong where most men are concerned. Badly cooked food on cold plates may upset a man’s temper and make him unbearable, when a good dinner will turn the same man into an angel of kindness. Was it not Byron who said ?—

All human history attests
That happiness for man,—the hungry sinner!
Since Eve ate apples, much depends on dinner.

That shows Byron knew a thing or two, Peggy! And no wise woman will pester a man with questions, or, above all, ask him a favour, before dinner. If a man returns home tired after a hard day’s work or play, and is bothered by household worries, nine men out of ten (we are not dealing with the tenth man) will become impatient and irritable.

“First give your man a good dinner; then, when he is seated in front of the fire with a choice cigar, there is little he will deny you. I read somewhere lately, ‘Never forget the great truth that dinner precedes blandishments, not blandishments dinner; and though it is true that if you offered him a choice between dinner and kisses, he would say he would take both, yet he would invariably begin with the dinner, and allow the kisses to wait.'”

“I should have thought if my husband loved me he would like me to tell him all my anxieties, and be glad to comfort me,” I said plaintively.

“Did I not say that we are not discussing the tenth man, nor yet one of the heroes in Miss Austen’s novels? I imagine we are speaking of the ordinary man of to-day,—the 1 I’m an Englishman and the best at that’ sort of man, whom all other men call a ‘good fellow,’ who is perfectly ‘ straight’—in other words, acts up to all he has ever been taught of honour and uprightness, etcetera, etcetera. This sort of man would not care to hear all your little worries, Peggy, nor must you expect much sympathy from him if you have a headache. He does not, as a rule, surround his wife with les petits soins, as the French husband does. Although the Englishman is usually a more trustworthy, straightforward character, the Frenchman, however faithless, is very polite to his wife.

“I once knew a whole ménage broken up because a woman who is a friend of mine met a charming man who daily inquired with tender concern after her arm (she had been recently vaccinated), whereas her husband, returning after a week’s absence from home, never even alluded to it. My friend’s husband is a dear good man, and immeasurably superior to the creature who has beguiled her fancy. But how few husbands recognise the fact that women attach great importance to little attentions, those small courtesies which have been compared to the ‘ oil that causes the wheels of the matrimonial coach to run smoothly’! You will find nowadays, Peggy, it is generally the wife who has to oil the wheels with the oil of tact and to drive the coach herself as well.”

“If I ever have to drive,” I murmured, ” it shall be with the silken threads of love.”

“Then see that you drive with a light hand, my dear,” retorted Diana; “if you strain a thread harder than it will bear, it will break! And here is another piece of advice: no wise woman will ever let a man know she is holding the reins. Have you not heard my Freddy talk very big about a man being master in his own house? I am sure you have, often. That is because I allow him to have his own way in all minor details that are of no consequence, such as the opening or shutting of a window, or the moving of a piece of furniture, or the hanging of a picture. So Fred considers me the most charming and amiable of my sex, and we never have words over trifles, or bickerings—those ‘little rifts within the lute’ which sooner or later must make the marriage ‘music mute.’

“A woman should be as bright and pleasant at home as she is in the world; she must not give her best to strangers, and keep a dull face for home. For the same reason she should always be well dressed and bien-soignée:. A man meets with charming and pretty people at other houses, and it naturally disgusts him to find his wife in an old, tumbled, or even dirty teagown, with safety-pins doing the duty for departed hooks and eyes, and with hair unbraided and uncurled ‘”

“Surely,” I said, “a man’s love must be a poor thing to depend on such trifles!”

“Think naught a trifle, tho’ it small appear;
Small sands the mountain, moments make the year,
And trifles life, …”

quoted Diana, waving her hairbrush dramatically. ‘To these I could add many bits of advice, had I time. Do not depreciate yourself, or own to being in the wrong; a man will take you at your own valuation.

“Never contradict your husband in public, even if he makes a gross misstatement; always make him appear at his best to others. ‘There is only one thing worse than bickering in public, and that is lovemaking in public’

“Always tell your husband he is what you wish him to be, and he will gradually become so. When your husband is affectionate, return his kisses, respect his moods, and do not for a moment imagine it is only women who are unreasonable. Far from it; men are often very unreasonable.

“And take my advice, Peggy, when you marry, begin as you intend to go on. My grandfather’s old servant, Foster, appreciated the force of this. You have heard of Foster? He was quite a character. When my grandparents were starting on their wedding-tour, there was a question raised as to whether granny’s band-box should be allowed inside the postchaise, when Foster whispered aside to my grandfather, ‘Bandbox to-day, band-box all your life, Sir John!'”

3 replies on “On the Management of Edwardian Husbands”