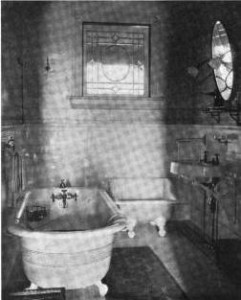 For a room so intimate and created for the expulsion of bodily excrement, the Edwardians were inordinately obsessed with bathrooms and plumbing. It was quite commonplace to discuss one’s digestive system and “regularness,” and during a house party in the country, the best hostesses paid close attention to the number of guests invited per bathroom. The bathroom was also a frequent bone of contention between American heiresses and their new English family, and many butted against the centuries-old traditions of hip baths, chamber pots, and privy closets.

However, as the 20th century dawned, and the English discovered the delight and convenience of bathrooms via luxury hotels, new or updated country houses, and ocean liners (and were alerted to the health benefits of modern sanitary plumbing), an up-to-date bathroom became de rigueur for anyone with pretensions to fashion, or at the very least, desirous of guests who looked forward to a Saturday-to-Monday at an otherwise ancient country seat. 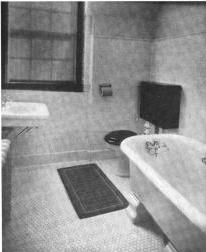 According to Houses and Gardens by Mackay Hugh Baillie Scott:

In the development of the modern bathroom there is therefore no precedent in the tradition of the house, and in the average modern dwelling it will be well that the suggestion of spotless cleanliness and practical efficiency should be its salient characteristics. The floor and lower part of the walls of tiles, the bath and basin of white enamel with no pipes enclosed, with no dark corners to harbour dust and dirt, and the art of the bathroom as expressed in useless and dirt-concealing patterns rigorously excluded—such a scheme will, perhaps, represent the best that is possible for the average household.

…The bathroom should be so placed that the plumbing is reduced to a minimum, and the whole system is as simple and compact as possible, free from possible damage by frost, and capable of repair in all its parts without interference with the structure of the house. The quality of mystery has its artistic value in the house, but in the matter of plumbing it will probably only be appreciated by the plumber. 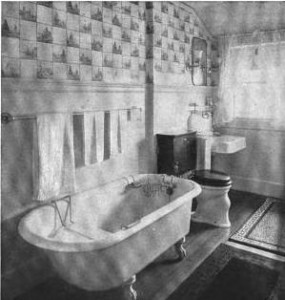 The modern bathroom was neatly and uniformly tiled, with porcelain fixtures, and marble wainscoting. Of the fixtures, the simplest bathrooms featured a toilet, a lavatory with bowl (the sink), bathtub, and mirror, whereas the most luxurious added a needle show, a fixed bath, heated towel rails, and other exquisite details to this room. The earliest bathrooms added to country houses or town mansions were usually converted linen closets, but by the mid-1900s, architects, and those who commissioned their services, considered the bathroom a room just as worthy of individuality and space as a bedroom or sitting room!

4 thoughts on “Edwardian Interiors: The Bathroom”