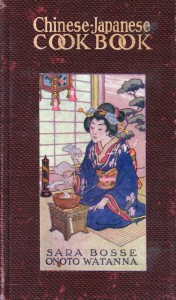 The pre-launch issue of GILDED included an article on the popularity of dining in Chinese restaurants and chop suey joints in Gilded Age America. In response to one reader’s request for actual recipes from that era, I dug up a few digitized cookbooks available online to oblige her request! The most thorough and helpful cookbook was the Chinese-Japanese Cook Book (1914), which laid out in detail, how a home cook could replicate the dishes found in their favorite Chinese restaurant. I have not verified these recipes myself, but they do look tasty.

The secret of the solid, flaky, almost dry, yet thoroughly cooked rice lies in the fact that it is never boiled more than thirty minutes, is covered twenty minutes, never stirred nor disturbed, and set to dry on back of range when cooked, covered with a cloth.

Syou, sometimes called Soye, is similar to Worcestershire and similar European sauces. In fact, the latter are all said to be adaptations of the original Chinese syou, and most of these European sauces contain syou in their makeup.

Clean a fresh young chicken of two and one half pounds. Cut off all the flesh; put the bones, with liver and gizzard, into three pints of cold water, and boil for two hours, adding water if it boils away.

While the stock is boiling, prepare the following:

Cut up the chicken meat into small pieces. Cut up very fine one quarter pound of lean pork. Wash and soak in lukewarm water one quarter pound of dried mushrooms. Pull off all the stalks. Peel and cut a dozen lotus seeds or water chestnuts. Chop three stalks of celery very fine, and also one onion. Pour off the liquor from the bones, and strain. Cut up liver and gizzard fine and return to stock. Add all the ingredients, with one teaspoonful of salt and one tablespoonful of syou. Boil all together for one hour.

Two eggs; one cupful of fish meat; two cupfuls of rice flour; two tablespoonfuls of peanut oil; one and one half teaspoonfuls of salt; one quarter pound of almonds.

Take any dried fish, and remove all bones and skin. Then pound the fish into a powder, and mix one cup of the fish with a quarter pound of blanched almonds, also pounded, two cupfuls of dried and powdered rice flour, and half a teaspoonful of salt. Beat the whites of two eggs with a little cold water, enough to make a thin paste. Mix well all together. Roll very thin, cut into cakes, and bake in a hot oven in hot peanut oil for twenty minutes. Remove the cakes from the oil and drain on paper in a slow oven until cakes are dry and crisp.

Clean a young spring chicken, and cut it into small pieces. Fry to a golden brown in hot, sweet lard. Serve with a brown gravy prepared as follows: Boil the giblets until tender, then chop very fine and return to the liquor in which they were boiled. Add a tablespoonful of syou and half an onion chopped fine; boil for ten minutes. Thicken with a teaspoonful of cornstarch or rice flour, and pour over the chicken. Serve hot, with rice.

Mix thoroughly two cupfuls of rice flour, one and one half cupfuls of powdered sugar, and half a cupful of blanched almonds, chopped very fine, with a quarter of a cupful of almond oil. Moisten with two beaten eggs. Use no water, and if too stiff, add more egg. Roll about quarter of an inch thick, and cut in fanciful shapes. Place half an almond in the center of each cake, and bake them for one hour in a moderate oven. These cakes are certain to keep for a long time if they are placed in a tin box.