Much of the discussion about women’s suffrage tends to focus on England, the Pankhursts, and their militant tactics, but the battle for the vote raged just as vehemently in the United States. If you follow my Twitter account, I spent most of the weekend (sorry Dowager Countess!) retweeting links to articles and pictures of the participants and artifacts from the Woman Suffrage Parade held exactly 100 years ago on Sunday and those who participated in its recreation. Though the 1913 parade was not without its own external and internal strife (namely, the abuse hurled at the women as they marched in Washington, and the controversy raised when black women asked to participate, much to the horror of many white Southern women delegates, respectively), the 2013 parade was a testament to how far we’ve come on issues of gender and race since then.

Photos from The Atlantic, via Library of Congress For a little fun, here’s a very clever remake of Lady Gaga’s “Bad Romance” with lyrics changed to reflect the fight for women’s suffrage: Eliza J Nicholson, known by a pseudonym, ‘Pearl Rivers,’ was one of the first women to be involved in journalism and run a successful, political paper. Eliza’s husband gifted Eliza the paper titled, ‘The Picayune,’ after his death and through her knowledge of journalism and writing; Eliza not only managed the newspaper but through hard work, turned it into a success. During the lifetime of her husband the paper had struggled, but under the control of Eliza it flourished and became an American household name. Eliza was a country girl who dreamed big. During childhood play she was constantly using her imagination and due to being an only child she often had to make her own entertainment. These childhood adventures were the sources for her first poetry, which was considered good enough to publish in journals and newspapers of the time period. The editor of ‘The Picayune,’ invited her to become a literary editor of the paper, a rare accomplishment for a woman of the time period.

Spring, the fairest of the seasons,

Spring the virgin queen is dead;

And a young voluptuous sister,

Reigns on the throne instead.

And within the court of nature,

Now in regal state she lies.

Of the banner borne so proudly,

Lies beside her, dead and cold.

Sleepeth deep and calmly nigh;

Round her mouth a smile still lingers,

Still a teardrop in her eye.

On a bier of wilted roses,

Lies the tender Lady May,

And her constant loves, the poets,

Royal honors to her pay.

Round her lovely form they throng,

And embalm her precious beauty,

With the costly myrrh of song.

Unto each she left a token,

As a dying pledge of love:

One she gave her azure girdle;

One she gave her rosy glove;

One she gave her silver sandals,

Bright with shining gems of dew;

O’er the shoulders of another,

She her holy mantle threw.

But to me, the humble singer,

Leaning on my harp apart,

From the royal high-voiced poets,

She has left a broken heart.

Through the reign of glowing summer,

Lies the royal dead in state;

Wait! The sober days are coming,

Sad pall-bearers of the dead,

In the distant autumn country,

Hear their slow and weary tread.

If you want to read more of this poem or explore ‘Pearl River’s,’ poetry further, her book can be found freely online at: http://archive.org/details/lyrics00nich 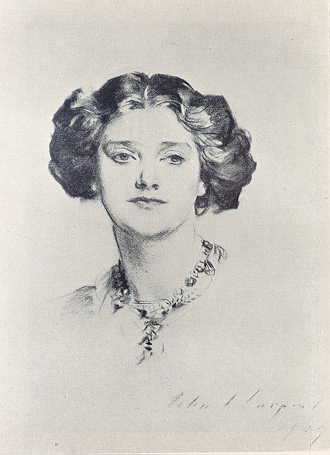