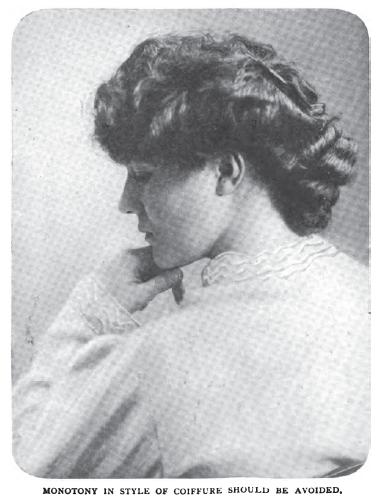 Before attempting to dress the hair it should be thoroughly brushed and combed. Many women are satisfied with giving their hair these attentions at night only. This is a mistake, for the ease with which the hair will “ set” becomingly will be greatly increased if its tone and vigour have been stimulated by previous treatment with brush and comb. If the hair is worn loose at night, it will doubtless be slightly tangled, and must be carefully restored to order before the actual hairdressing can begin. If, on the other hand, the hair is wom plaited or tied at night, fresh life will be restored to it by allowing the air to blow through each tress.

Artificial waving is best done before the process of hair-dressing is begun, either by the use of curling pins or by the use of hot tongs. The latter method has many disadvantages, among them being a certain risk to the health of the hair. Constant use of irons tends to make the hair brittle, and their drying action must be counteracted by the use of a good brilliantine or hair lotion. An excellent method of producing a deep wave is to insert the hot tongs (testing them carefully first to ensure that they are not too hot) in such a position that the hollow part of the prong is under the piece of hair to be waved. The tongs are then closed, rolled over slightly, and pulled obliquely alongside of the head. If in a moment they are removed, the tress of hair on which they have operated will be found to have taken a deep wavy impression, giving a graceful waved appearance, not a crimp. This is the effect of drawing the tongs obliquely instead of letting them rest straight in their pressure on the hair.

At the present time a low coiffure which involves a separate dressing of the front and back portions of the hair is very popular. The portion of the hair above the forehead is divided off from the rest. It may then be parted either in the middle or at the side, or left to be arranged in its undivided state. Perhaps the most generally becoming style is that in which, after dividing the hair by a short parting, each portion is carefully French—combed. By this means, by fluffing up the under-surface of the hair, it is given an artificial thickness that otherwise would be absent or could only be supplied by pads. The hair is then rolled back and held in position by means of side-combs. The ends of these rolled-back portions of the hair should then be smoothed down over the back of the head and allowed to mingle with the hair to be dressed in the nape of the neck.

A girl with very long and abundant tresses can dress her hair becomingly by dividing the back portion into three tresses. Each one should be French-combed and rolled, and then each roll pinned lengthways across the back of the head. One roll will be pinned above the other, so that a spiral effect is obtained. The lower rolls of the spiral should be narrow, while those at the top may be really wide. The addition of a wide ribbon or velvet bow on the top of the spirals will be a dainty finish.

For evening wear few hair ornaments are prettier with a low coifl’urethan the bandeau of ribbon, tinsel, or pearls. Roman pearls sewn on black velvet make a charming bandeau for a fair-haired girl. A gold chain can be used with excellent effect, twisted among the tresses of a dark-haired woman. A single flower, a rose or carnation, can be fastened against the coil of hair, and looks exceedingly pretty.